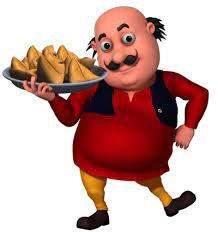 Motu Patlu is an Indian animated sitcom television series written by Niraj Vikram for Nickelodeon India. The series is produced by Cosmos-Maya Studios It is adapted from the classic comic strip Lotpot. It was premiered on 16 October 2012. It focuses on two friends, Motu and Patlu,

He is living in fictional town called Furfuri Nagar, however later in the series they live in another fictional city known as Modern City.

Motu Patlu is directed by Suhas Kadav and produced by Deepa Sahi and Anish J.S. Mehta. The show’s theme song, “Motu Aur Patlu Ki Jodi”, is composed by Sandesh Shandilya and sung by Sukhwinder Singh. It is one of the most popular children’s shows in India.

Motu is a plump man ,he likes to eat Samosas which increase motu power, Strength, intelligence, Speed and vision. He is always looking for the easiest way to earn money, have fun and to eat a lot of samosas.

He is a good-natured man who wants to help others.He work with patlu and help other people.

patlu is a skinny man. he is a smartest  guy in city. He like reding newspaper .He is not a Strong.but he help other people.

Dr. Jhatka is an eccentric scientist. In some older episodes he was shown as a dentist. His accent is like Sardar, so he is referred to as Punjabi.

Ghasitaram is a cowardly person who always claims to have 20 years of experience in various fields but only a few of the experiences are useful to others. He is referred to as Bengali; He hails from Ghatal located in West Midnapore in West Bengal.